After a few nights of tussle with the affinity system in the Creation Kit, I can proudly present a new update for the Fallout 4 Donald Trump Companion. Here’s a quick recap of all the changes made. 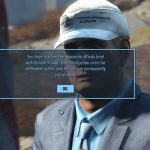 Version 1.2 introduces a basic 5-stage affinity system. I’ve included all the vanilla stages (Hatred, Disdain, Neutral, Admiration and Infatuation). Just like with any other Fallout 4 companion, the affinity level moves up or down with certain events that Donald likes or dislikes. However, the “Infatuation” level is the only one that actually does something as of now. It triggers a new dialogue that will reward you the all-new “Affordable Walls Act” perk.

I’ve added an incredible amount of audio in this update. The amount of “random shout” topics you can add audio to in the Creation Kit is crazy. I could do that a whole week nonstop and I still won’t have covered all topics with a good rotation. It’s nuts. And it still leaves room for future updates I guess.

Let me put it into perspective. The Trump NPC had 62 audio files in version 1.1. With the 1.2 update he has 152 audio files. I can only encourage you to travel with him to different places. He has a lot to say about clean places, high-tech places, dirty places and so on. He will comment drug use and alcohol consumption and sometimes even interaction with other NPCs. And, sorry folks, I couldn’t resist: He will say something about trucks at the Wicked Shipping Fleet Lockup 🙂

I noticed that he’s quite weak in the late game. It really shows once the player has reached a level well above 50. This was caused by a misconfiguration in the NPC stats. I did not intend to make im ridiculously weak. The FAQ even stated that we was as good as any other companion (ooops!). Anyway, this update fixes it and should make him competitive regardless of the players level.

I’ve also added an AI package that will prevent him from moving while he’s in dialogue, cause I noticed that he could sometimes just walk away while talking. Stupid.

In order to make the affinity system work, you have to do a clean save reinstall of the mod.

Note that just overwriting the old version straight away will most likely cause the affinity perk dialogue to never trigger.

There’s so much I’d like to do and try out. An individual companion questline based on affinity level, more audio, individual clothing, retextured buildings and all kinds of stuff. But I expect the interest in this mod to drop significantly after the election on 8th November. So I’ll focus on other projects now and watch the traffic after the election before I make up my mind. Anyway – if a bug pops up I’ll fix that of course. Just use the comment function, contact me on Facebook or Twitter or drop a mail.