Another weekend, another TerraTool update. Since the project launched, TerraTool has been updated to a new point release every one or two weeks, bringing new features and enhancements for the LiF community. As you can see in the changelog, the last update was probably a bit of a rush. Especially the map refresh entailed quite a number of fixes and adjustments and quite some hours of troubleshooting. This pretty much slowed down development, but I’m quite happy to have it in a stable condition now.

Todays 1.5.0 release of TerraTool focuses on forest growth and customization. It also includes a way to repopulate deserted servers with trees. I read through the LiF and Steam forums now and then: No matter what day or week you’re looking, there’s always some thread about forest problems somewhere on top. Mainly it’s people complaining about forest dying after a few weeks/months of server uptime.

I’ve built a somewhat user-friendly interface to configure the forest growth on a LiF server. You can customize the desired forest state of your server by point and click. All sliders available are already adjusted to the proper limits (which are known to break things when exceeded), so there’s not much of a risk to mess up anything.

For those of you not familiar with how LiF terrainblocks and the forest configuration works, very briefly: As you can see on the map displayed, it is divided in nine tiles with IDs from 442 to 450. Each tile can be configured independently, allowing for certain tree types being available only in certain regions. Same for forest density.

The configuration loaded by default equals the vanilla cm_forest_maintenance.xml file of the LiF server. There is a lot of conifer trees in the north and broadleaf with lower density in the south. The middle tiles are a mixup of both. This configuration tries to deliver a realistic forest distribution. The only problem (in my opinion) is that the LiF:YO map is way to small for such climate zones that would realistically create such differences in forest types. So there is a good reason so change the forest configuration – and now you can do it without any knowledge on how to edit XML files. The generator will output a properly formatted XML file for your server.

One more thing to mention is the Tree Againg Speed and Tree Max Age setting. This is indeed a configuration that can be done independently for each TerrainBlock in the XML file. But I fail to see a reason to have diffrent tree age limits for certain areas. Also during the testing of this, it has been pretty annoying for me to change these settings for each terrain everytime. So I decieded to make this a global configuration. If you ever see a reason to have different tree age settings for your terrain blocks, feel free to edit the result XML file accordingly. 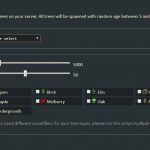 This is a simple script to spawn trees on your server. If your server lacks trees or lacks a certain tree type, you can use this to spawn some. It might be a good solution for servers that somehow managed to kill a majority of their trees for whatever reason. But keep in mind that this shouldn’t be a permanent and reoccurring solution for forest issues. If you need to use it repeatedly to repopulate your server with trees, you should adjust your forest maintenance XML file instead.