Please note that there’s no point in running these scripts on your server every day. Even on the most active servers it’s more than enough to do a cleanup once every one or two months. Moreover: don’t expect a miracle! If your database is slow due to insufficient hardware performance or misconfiguration, this bit of optimization won’t turn it into a supercomputer.

Okay, this is something I’m a little excited about. Since the launch of FeudalTools one year ago, server owners have added their gameservers to the Server Manager on the Dashboard. The database behind it currently holds information about over 800 gameservers in total. We all know that there aren’t remotely as many active YO servers. Taking into account that not everyone adds their servers to the Server Manager and relies on other methods of Custom Map deployment, and not everyone is using FeudalTools or Custom Maps at all, there’s no doubt that there are countless obsolete records in that database. Servers that were added a long time ago and haven’t been up for months.

So I wanted to do a little spring cleaning. Therefore I need to check these servers periodically: Are they up? Is the database reachable? Some might be down temporarily so we can’t just delete everything that won’t respond today or tomorrow. Instead, the server will have to monitor these things over a longer period to build uptime statistics. Finally, servers that weren’t up for a month or so can then be deleted safely.

But if we have to check server status periodically anyway, why not leverage this effect and gather more information for some beautiful trend charts and graphs where you can track progress of a server? I’ve tried to archive this by collecting a set of data that currently includes online players, amount of characters, items, movable and unmovable objects in the database, tree population and, of course, server uptime. These stats are now steadily collected and will be displayed in chart graphs in the server manager. Formatwise, the current implementation is not final. I’m still experimenting with this and can probably extend it to fetch and treat even more datapoints more effectively after all dead servers have been removed from the database.

Some people have been asking for this since Custom Maps became popular in YO. It’s quite tricky, because in contrast to dedicated servers, the database part of the game is somehow embedded in the game client and the server console is not accessible. This is why it’s not possible to use the same method as for dedicated servers. It won’t work. But I figured out a way how I can use the database and files that were created from a dedicated server to inject a savegame with a Custom Map. This limits custom maps to pre-generated savegames only. So there will be no randomess of resource distribution and no options for the map generator. But it is at least something, right? 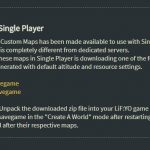 Setup is fairly easy. You download the savegame from FeudalTools download page and unpack it into your LiF:YO game directory. After a game restart, the savegame will be available in the “Create A World” mode.

Server Details & Settings Page:
The forms to edit server details and livemap settings were taken to a new dedicated detail page for each server that is added to the Dashboard. Besides the new statistics graphs, this page holds a summary of all information about the server and lets you edit its details.

Stackable Keys and Auto-Delivery:
The whole donation and key activation system is fully automated now. No more waiting time. Supporter Keys are sent instantly to the senders mail address once the donation completed. Another improvement is the stackability of key duration – you can activate multiple keys and their duration will add up.

Public Map and Tools List:
All map lists and the Tools/Scripts page are now publicly visible by anyone. No login is needed to browse these anymore. I did this to enable search engines to index these pages. This will hopefully make it easier to find the maps and tools with Google in near future.

As usual, all changes can be found on the changelog.

Please report any issues or bugs in the FeudalTools Forums. Thank you!